What will you do when our Constitutional Democracy falls?

...when public schools shut down
-only the wealthy get an education
-in Uganda and Nepal, families must pay for their children's primary education

...when non-profit medicine and hospitals are gone
-only the wealthy get medical care
-in the Republic of the Union of Myanmar, for instance, life expectancy is 50 years

...when public transportation ends
-only those with their own transportation have access to anything
-the Trump administration is actively withholding Congressional approved funding

...when privacy rights are abolished
-Big Brother is here

...when Due Process no longer exists
-murder rates are highest in countries without due process

...when forced military service is instated for you and your children
-hope for no wars – but there are always wars

...when the freedom to practice your religion is gone and a new religion is forced upon you
- Russia’s national church is the Russian Orthodox Church

...when you, your wife, or your daughter’s right to become a mother is determined by someone else
- the United States has a history of forced sterilization as recent as the 1970s

...when The State determines whether you get to live or die
-China enforces forced abortion for their limited child policy
-in North Korea people are forced to kill their disabled children at birth
-the US was still practicing eugenics up into the 1970s 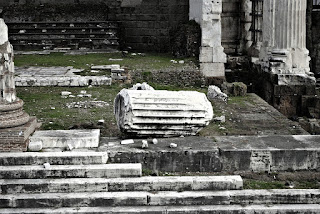 I hope you are preparing. Because with the confirmation of Brett Kavanaugh to the Supreme Court of the United States, the pillars will have started to crumble. Constitution be damned.


On Public Education: "...Kavanaugh predicted in a TV appearance in 2000 that school vouchers would one day be upheld by the Supreme Court." Something that has been shown will discriminate against and potentially exclude low income students, students of color, those with disabilities, and those identifying as LGBTQ. https://www.politico.com/newsletters/morning-education/2018/07/10/a-dig-through-kavanaughs-record-on-education-finds-plenty-of-material-274850

On Health Care: "...Among the things that distinguish him from the other finalists on Trump’s list is his expansive view of executive power — he argued that a president could decline to enforce a statute such as Obamacare even if a court upholds its constitutionality — and his dissent in a 2011 case in which others on his appellate court upheld the constitutionality of the Affordable Care Act."https://www.washingtonpost.com/opinions/brett-kavanaugh-could-take-an-ax-to-obamacare/2018/07/09/c8817c50-83df-11e8-8f6c-46cb43e3f306_story.html?utm_term=.0404866dedd9

On Privacy: "...While the full D.C. Circuit declined to review the stay order, in his concurring opinion Kavanaugh went out of his way to assert that the metadata program was “entirely consistent with the Fourth Amendment.” Even in the absence of full briefing, Kavanaugh concluded that the alleged “critical national security need” for the program “outweighs the impact on privacy.” https://thehill.com/opinion/judiciary/404751-brett-kavanaughs-views-in-privacy-and-the-fourth-amendment-should-make

On Due Process: "...In Doe Tarlow v. District of Columbia, a 2007 D.C. Circuit Court of Appeals case, three people with intellectual disabilities living in an institutional setting in Washington, D.C., believed their due process rights were abridged when doctors would not consider their wishes in elective surgeries." http://prospect.org/blog/tapped/kavanaugh-nomination-dangerous-disability-rights-community

On forced abortion: "...Kavanaugh determined that disabled people who “lack mental capacity” do not have the right to weigh in on medical decisions. Because the case involved two women who were forced to have abortions, it is ringing alarm bells, and rightly so, for reproductive rights and justice advocates—but the decision goes beyond abortion alone. Rather, it suggests Kavanaugh might not rule favorably on cases surrounding bodily autonomy, from coerced sterilization to denial of transition care." https://rewire.news/article/2018/08/28/brett-kavanaughs-forced-abortion-decision-is-about-far-more-than-reproductive-rights/

On The Constitution: "What’s at stake right now is that Brett Kavanaugh, the man our president has just nominated to the highest court in the land, isn’t a mid-range “conservative” in the tradition of Anthony Kennedy; rather he’s an originalist, of the Clarence Thomas and Antonin Scalia sort. And if the executive, in nominating and endorsing originalism, joins power with a newly configured Supreme Court of committed literalists—i.e., an insuperable majority of ultraorthodox—and if this new alignment really proceeds to take the Constitution back in time, it means that Congress is going to have to pass new laws to explicitly keep in place our civil rights and social reforms, particularly when it comes to race, gender, sexuality, labor, public accommodation, immigration, and equal protection. I simply do not see a Republican-dominated Congress prepared to step up to that plate."
https://www.thenation.com/article/judge-kavanaugh-originalist-new-terrifying-interpretation-executive-power/